Classic Meg Cabot, this book entertained me, but was nothing special. 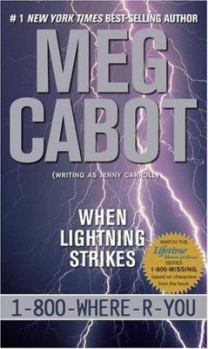 Just because her best friend wants to exercise, Jessica Mastriani agrees to walk the two miles home from their high school. Straight into a huge Indiana thunderstorm.
And straight into trouble.

Not that Jess has never been in trouble before. Her extracurricular activities, instead of cheerleading or 4-H, include fistfights with the football team and monthlong stints in detention — luckily, sitting right next to Rob, the sexiest senior around.

But this trouble is serious.

Because somehow on that long walk home, Jessica acquired a newfound talent. An amazing power that can be used for good…or for evil.

I’m a big fan of Meg Cabot’s stories. They are always (usually) funny, light-hearted, and imaginative. When Lightning Strikes followed this pattern.

I picked this book up at a used bookstore on a whim. It only took a few hours to read, and they were an entertaining few hours. However, this book is probably my least favorite Meg Cabot book to date, mainly because it felt like so many of her other books crammed together.

Jessica, the protagonist, is a belligerent high-schooler whose moral code lands hers in trouble; she can’t let someone she loves be insulted without paying the insulter back with her fists. Jess was an entertaining main character, but her voice was extremely similar to that of Samantha in All-American Girl (which I reread recently, review here). I would have appreciated more originality to distinguish Jess from countless other Cabot protagonists.

Jess’s reactions to her newfound powers (being able to find missing people in her dreams) was believable but naive. The fact that she was surprised when the police came to find her was–let’s be honest–annoying. It was obvious that her miraculous abilities would raise red flags, and the fact that she was never suspected as the kidnapper itself struck me as unrealistic. As it was, the police went along believing her psychic abilities, which allowed a dramatic plot to unfold, but which disconnected the story from reality.

Her best friend, Ruth, was also a conglomeration of other Meg Cabot best friends. She’s the misfit who wants to be cool, the loyal friend of the other misfit, even though their personalities aren’t actually similar. Though not unique, she added conflicts to the plot as well as appropriate humorous moments.

The love interest, Rob, was less impressive. All of the other Meg Cabot books I’ve read had amazing love interests, the kind of guys you need the main character to get with. I didn’t fall for Rob. He wasn’t enough of a bad boy to be interesting, and he never developed enough of a personality for me to care about him. In later books, I’m sure he will become swoon-worthy, but I wish that more had happened in book one, to compel me to read the rest of the series. As it is, I doubt I will ever read enough of the series for my opinion of Rob to change.

The plot was well paced; it kept me reading, and it never lagged. The plot was the right about of ridiculous–just enough that it was fun to read, testing the border of sheer impossibility but never fully crossing it. The other subplots–dealing with her family and her friends–were interesting. They set up conflicts to be developed more fully in later books of the series.

Ultimately, this book feels like the beginning of a series. Everything is half-finished, leaving characters and subplots waiting for later books to develop during. Meg Cabot is a talented writer, but everything of this book had a parallel in another of her contemporary reads, and I found myself longing for an original moment or an honest surprise.