For a while, I had been keeping a mental list of books I wanted to buy and read this summer. Finally, last week, I used up some old gift cards and splurged on six new books to read this summer. (They were actually shockingly cheap, which was pretty nice.)

As far as a summer TBR list goes, these books are the only books I know for sure I will try to read. They won’t get me to my goal of reading 20 books this summer, but I plan to reread books and catch up on sequels as well.

(All plot descriptions are from Amazon) 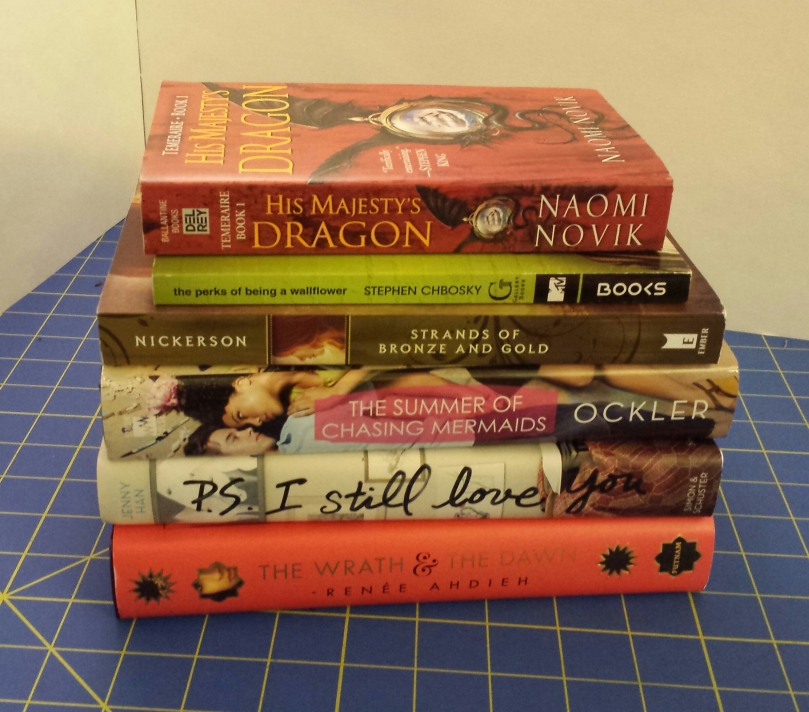 Aerial combat brings a thrilling new dimension to the Napoleonic Wars as valiant warriors rise to Britain’s defense by taking to the skies . . . not aboard aircraft but atop the mighty backs of fighting dragons.

When HMS Reliant captures a French frigate and seizes its precious cargo, an unhatched dragon egg, fate sweeps Capt. Will Laurence from his seafaring life into an uncertain future–and an unexpected kinship with a most extraordinary creature. Thrust into the rarified world of the Aerial Corps as master of the dragon Temeraire, he will face a crash course in the daring tactics of airborne battle. For as France’s own dragon-borne forces rally to breach British soil in Bonaparte’s boldest gambit, Laurence and Temeraire must soar into their own baptism of fire.

Napoleonic Wars with dragons?! Count me in! After taking AP European history last school year, I’ve found myself enjoying alternate/fantasy historical fiction more than I used to, mainly because I actually know the historical context. After reading (and LOVING) Uprooted by Naomi Novik, I had to pick up her other series, even if isn’t young adult.

The Perks of Being a Wallflower by Stephen Chbosky

The critically acclaimed debut novel from Stephen Chbosky, Perks follows observant “wallflower” Charlie as he charts a course through the strange world between adolescence and adulthood. First dates, family drama, and new friends. Sex, drugs, and The Rocky Horror Picture Show. Devastating loss, young love, and life on the fringes. Caught between trying to live his life and trying to run from it, Charlie must learn to navigate those wild and poignant roller-coaster days known as growing up.

This book has been on my radar for a while (what with it being famous and everything), but I haven’t read it. I am always in the mood for high-quality YA contemporary stories, and I hope that this “classic” lives up to its reputation.

Strands of Bronze and Gold by Jane Nickerson

When seventeen-year-old Sophia Petheram’s beloved father dies, she receives an unexpected letter. An invitation—on fine ivory paper, in bold black handwriting—from the mysterious Monsieur Bernard de Cressac, her godfather. With no money and fewer options, Sophie accepts, leaving her humble childhood home for the astonishingly lavish Wyndriven Abbey, in the heart of Mississippi.

Sophie has always longed for a comfortable life, and she finds herself both attracted to and shocked by the charm and easy manners of her overgenerous guardian. But as she begins to piece together the mystery of his past, it’s as if, thread by thread, a silken net is tightening around her. And as she gathers stories and catches whispers of his former wives—all with hair as red as her own—in the forgotten corners of the abbey, Sophie knows she’s trapped in the passion and danger of de Cressac’s intoxicating world.

Glowing strands of romance, mystery, and suspense are woven into this breathtaking debut—a thrilling retelling of the “Bluebeard” fairy tale.

Well, I’ve never heard of the Bluebeard fairy tale, but the premise of this book sounds interesting anyway. I love the eerie tone of the description and can’t wait to see where the story goes.

The Summer of Chasing Mermaids by Sarah Ockler

The youngest of six talented sisters, Elyse d’Abreau was destined for stardom—until a boating accident took everything from her. Now, the most beautiful singer in Tobago can’t sing. She can’t even speak.

Seeking quiet solitude, Elyse accepts a friend’s invitation to Atargatis Cove. Named for the mythical first mermaid, the Oregon seaside town is everything Elyse’s home in the Caribbean isn’t: an ocean too cold for swimming, parties too tame for singing, and people too polite to pry—except for one.

Christian Kane is a notorious playboy—insolent, arrogant, and completely charming. He’s also the only person in Atargatis Cove who doesn’t treat Elyse like a glass statue. He challenges her to express herself, and he admires the way she treats his younger brother, Sebastian, who believes Elyse is the legendary mermaid come to life.

When Christian needs a first mate for the Cove’s high-stakes Pirate Regatta, Elyse reluctantly stows her fear of the sea and climbs aboard. The ocean isn’t the only thing making waves, though—swept up in Christian’s seductive tide and entranced by the Cove’s charms, Elyse begins to wonder if a life of solitude isn’t what she needs. But changing course again means facing her past. It means finding her inner voice. And scariest of all, it means opening her heart to a boy who’s best known for breaking them…

Of all the books in this haul, I am the most weary of this one. Contemporary books that focus on damaged protagonists often don’t work for me. Romances that center on playboys are also a mixed bag. But I love the title, and the cover, and the mermaid motif, and I’ve heard some good things about this story, so I’ll willing to be proven wrong. 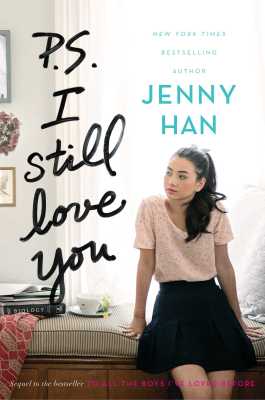 She and Peter were just pretending. Except suddenly they weren’t. Now Lara Jean is more confused than ever.

When another boy from her past returns to her life, Lara Jean’s feelings for him return too. Can a girl be in love with two boys at once?

Again, I am weary of this book. The description basically spells out a love triangle, and promises lots of cringe-worthy awkward moments. However, I enjoyed the first book in this series, and it left me curious to see how a sequel would go. I am hopefully that this book, like the first installment, pulls off a love triangle and continues to deliver a fairly unique story.

The Wrath and the Dawn by Renée Ahdieh 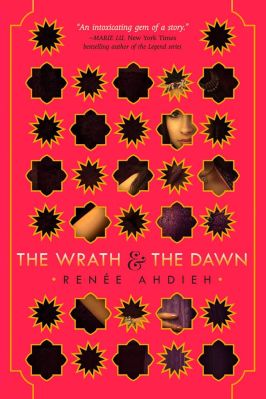 Every dawn brings horror to a different family in a land ruled by a killer. Khalid, the eighteen-year-old Caliph of Khorasan, takes a new bride each night only to have her executed at sunrise. So it is a suspicious surprise when sixteen-year-old Shahrzad volunteers to marry Khalid. But she does so with a clever plan to stay alive and exact revenge on the Caliph for the murder of her best friend and countless other girls. Shazi’s wit and will, indeed, get her through to the dawn that no others have seen, but with a catch . . . she’s falling in love with the very boy who killed her dearest friend.

She discovers that the murderous boy-king is not all that he seems and neither are the deaths of so many girls. Shazi is determined to uncover the reason for the murders and to break the cycle once and for all.

This book is a retelling of A Thousand and One Nights–another story I don’t know. The description promises such an amazing story, however, so I don’t care what the original plot was. I feel like I’m going to love the protagonist of this story, and I hope that the romance will be appropriately swoon-worthy. My sister has already read this book (in all of one day), and (from the sounds she was making) seemed to enjoy it–though she screamed a lot about the cliffhanger ending. Also, I love the cover–it breaks from stereotypical YA covers and creates a breathtaking effect. (I didn’t even notice the girl standing there the first time I looked at the cover!)

Have you read any of these books? Which ones do you recommend?

And what books are on your summer TBR or just joined your shelves?