I held off from reading this book during the school year because I knew I would want to read it all in one sitting–and that’s exactly what happened when I picked it up this summer. 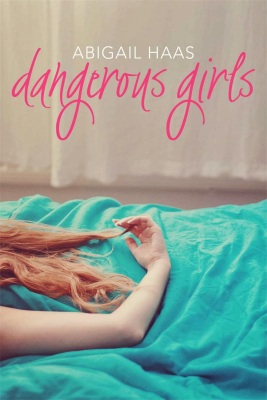 It’s Spring Break of senior year. Anna, her boyfriend Tate, her best friend Elise, and a few other close friends are off to a debaucherous trip to Aruba that promises to be the time of their lives.

But when Elise is found brutally murdered, Anna finds herself trapped in a country not her own, fighting against vile and contemptuous accusations. As Anna sets out to find her friend’s killer, she discovers harsh revelations about her friendships, the slippery nature of truth, and the ache of young love.

Awaiting the judge’s decree, it becomes clear to Anna that everyone around her thinks she is not only guilty, but also dangerous. And when the whole story comes out, reality is more shocking than anyone could ever imagine…

Let’s start off with this: this book is crazy. It is crazy and it takes you hostage and it doesn’t let you go. I read this book in one sitting, only taking breaks for meals. I couldn’t put it down, because I had this ever-present and mounting sense of dread and I just had to get to the ending because I knew I wouldn’t know the truth until basically the last page. In that regard, this book was everything a thriller/mystery is supposed to be.

The book is a massive series of flashbacks and flash-forewards, telling the story of how Anna and Elise became friends all the way through their fateful vacation and up until the trial for Elise’s murder. Some of the scenes were long and clearly explained what was going on, others were shorter and more vague, while others were told in alternative formats, like interview transcripts. I was amazed at that fact that I never got lost; usually with books like this, you start to lose track of where you are and what has happened, but even though this book’s chronology had basically been put in a food processor, it was easy to follow as a reader. I loved how the scenes flowed together across the timeline and how throughout the book we just kept learning more about Anna’s life, even the parts we thought we understood from the beginning.

Character-wise, this book is a mixed bag. I had a strong sense of Anna as a protagonist and I felt like I understood the things inside of her that drove her to party as wildly as she did with Elise and the rest of them. Elise, likewise, was clearly portrayed in my mind–she was as alive and vibrant as any character I’ve read about. I can’t say that I really liked or trusted Elise, but I appreciated that I didn’t like her–it fit with the story’s mood. The same goes for the rest of Anna’s friends. They were simplistically characterized but they all added an important voice to the story, and under the stress of the murder case they showed that they were not flawless humans (really they were what you would expect from the spoiled kids of uber-rich parents). During the flashback scenes, I liked watching them party and grow close, but I didn’t want to be them, and throughout the story there was always the threat that one of them could be a killer and the rest of them we’re loyal enough to tell the truth.

The characters involved in the trial were more interesting for me. There are not words for the helpless anger and frustration I felt against the prosecuting police officer, Dekker. He was the ultimate evil figure in power, and I loved/hated the way he painted Anna’s life to make her look like a murderer. The judge was a tiny beam of hope throughout the book. I trusted that she would be fair, but I also knew that Dekker was doing his job so well that fair would probably still condemn Anna. The news media’s take on the case fit perfectly with what I would expect if this happened in real life, and it was another voice of distrust that I ended up hating for Anna’s sake. Anna’s lawyers were equally kind and despicable, and I liked that we got to see doubt about her innocence even from the people who were supposed to be fighting for her. It was little details like that that ensured that the book had a feeling of realism and that I kept believing that this book could actually happen in real life.

As a cautionary tale, this book works wonders. Wow, let’s just say: trust issues. With friends, with foreign law enforcement, with lawyers, with news media. I doubt I will ever spend spring break in Aruba–it would just be too weird after reading this book.

But I need to rant about the ending, so from this point on, THE REVIEW CONTAINS SPOILERS. Do not read on if you haven’t read the book!

The ending really angered me. At first. The more I think about it, the more little pieces of the plot click into place and I see everything in a new light. But still, the ending was too sudden for me–it came out of the blue, and it had to do that, but at the same time, I wish I had had more of a sense of foreboding leading up to it.

I had spent the entire book, while everyone calls her a psychopath, countering it with the knowledge that I, as the reader, had the unique awareness that I was in her head. I had the truth, and she was feeling broken up and destroyed by the things happening to her, she was just the kind of person who could shut it down in the name of being “strong.” Having all of that turned on its head in the last five pages left me distinctly unsatisfied. As I’ve said, it was the only ending the book could have. Looking back on the story, Anna had to be the killer, or the entire plot would have been waste. None of that makes me less annoyed at the ending.

Half of me loves the ending. Finding out that you’ve been inside the head of a psychopath for the last 350+ pages is crazy and hair-raising in just the right ways. I want to reread the book and see if I pick up on clues, if I can tell that she is faking it.

But half of me wants more from the ending, so this book gets 4 stars instead of 5 stars. However, it still goes down as an incredibly impressive book, one that I will recommend to basically everyone.