In honor of the AP European History exam I took last week, I thought I’d take a moment to review the textbook that taught me the material.

If you’ve ever had a horrible textbook, this will speak to your soul.

I read the Eighth Edition of The Western Heritage by Donald Kagan, Steven Ozment, and Frank M. Turner, chapters 10-31, which encompass European history from 1300 to present day. 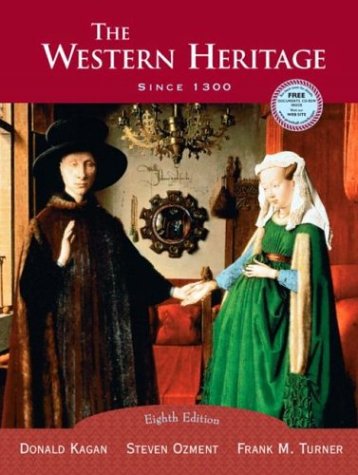 First and foremost, this book has an identity crisis. Half of the time, it acts as a textbook, explaining the who/what/where/when/how of European history to those who have essentially no background knowledge. The other half of the time, it seems to be making a point of being as mean to students as possible: leaving out sentences that could have clarified motivations, referring to things by names that they had never been called before (or were when they were originally explained), and acting like it was talking to an old friend who had already studied the history for years on end. It is clear that the book had different authors, and that these authors wrote different chapters, because things would be referred to by different names and titles between chapters. Sometimes, this was a slight annoyance (such as when they alternated between writing ‘Hapsburg’ or ‘Habsburg’), but other times, it was seriously confusing (such as using about ten different words to refer to the Netherlands, and never clarifying the nuances between the terms–if there were actually any). These problems should have been fixed by some sort of editor, but it seems as if no one cared enough to read the book start to finish and realize that continuity had been sacrificed to the deity of giving students headaches.

The images and “extras” included in each chapter only made this problem worse. The Western Heritage includes lots of maps, which at first sounds like a blessing for students. That is, until the text mentions a city or region that IS NOT INCLUDED ON THE MAP. More often than not, the cities on the map were never mentioned in the text, and any geographical markers the text included were no included on the maps. Essentially, the maps served no purpose besides taking up space–a trend continued by the countless “extras” included in each chapter. The textbook includes anywhere from half a dozen to a dozen “Documents” scattered throughout a chapter. In these boxes–which take up around a half a page–quotations from people or documents being discussed are included and then discussed. I never read any of these, mainly because they didn’t add anything meaningful to the text. There were also “Art and The West” pages included between chapters, discussing specific pieces of art, and “Encountering the Past” full-page explanations of cultural phemonima (such as Dueling in Germany or Table Manners).

All of these features were just space-fillers, making sure that the textbook–that students often carry around–was twice as heavy as necessary. I wouldn’t have minded if these “extras” actually helped me understand the text, but they were distracting more than anything.

The book also features basic images–portraits of important people, pictures of posters, sketches of inventions. These images were actually useful and well-chosen; however, their placement was a joke. Honestly, pictures were sometimes included in the text a page (or more) after the person/thing had been talked about. I would be reading about something, then turn the page and start reading about a different section. Then, when I glanced at the caption for the image included on the page I was currently reading, it would be referring to the person I read about on the previous spread, sending my brain back to that section and confusing me once I refocused on the text.

In all honesty, the textbook is fairly well-written. It features complex diction and sentence structure, making it enjoyable to read on a linguistic level. Sometimes, the sentence structure made things more confusing than they had to be, but as this was my first textbook that did not feel like it was written at an elementary school level, I did honestly respect that the writers had erred on the side of complexity.

I feel like most of the problems of this textbook could have been solved if it had been read by a copy editor and an average high school student before being published. The editor could have fixed continuity issues, and the student could have pointed out the things that made the book needlessly confusing.

Of course, these problems are not contained only to this textbook. They are issues that most textbooks probably have, encouraged by a textbook industry that thinks changing the colors in a diagram warrants a new edition of their book and that focuses more on “extras” than the actual text students try to learn from. However, this is the first textbook I’ve ever actually read all the way through (usually I just read the select parts of chapters that the teacher assigns), so this is the first time these issues have really hit me in the face.

Did I learn about European history this year? Yes, more than I had ever imagined. But that was from the help of numerous review books and another textbook (shoutout to the wonderful being that is History of the Modern World), as well as The Western Heritage. I’m glad that AP Euro was hard–I wanted it to be a hard class–but I don’t see why overcoming the nonsensical nature of this textbook had to be one of my trials.