The best book in the series by far. It’s exactly what the series needed to keep it from being predictable and boring. 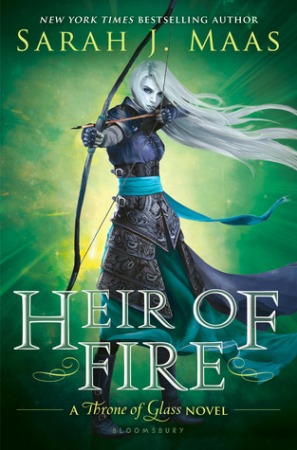 Celaena has survived deadly contests and shattering heartbreak—but at an unspeakable cost. Now, she must travel to a new land to confront her darkest truth . . . a truth about her heritage that could change her life—and her future—forever. Meanwhile, brutal and monstrous forces are gathering on the horizon, intent on enslaving her world. Will Celaena find the strength to not only fight her inner demons, but to take on the evil that is about to be unleashed?

This review will contain spoilers for books #1-3 of the series. I realized I can’t say much about this book without talking about all the stuff that happens!!!

There are three main plots running in this book, so I’m going to talk about each individually, and then how they worked together.

This was by far my favorite of the three plot lines. Probably because Celaena is my favorite character, and Rowan is also amazing. From the moment we met him, I could tell his dynamic with Celaena was going to be great to read. It was frustrating to see him underestimate Celaena and to know that he has no idea all the horrible things she has experienced, but it was hiliarious watching Calaena disrespect him.

Their dynamic evolved nicely–not too fast, not too slow. I loved–and hated–that Rowan consistently beat her in their fights. Not that it humbled Celaena, but it humbled me as a reader. In the first two books, there were few scenes when Celaena truly lost a fight. It was refreshing to have the invincible character knocked down a peg.

The training plot lines was good. I liked that Celaena sucked at it in the beginning. As the reader, it helped me understand her relationship with her past as a Fae–and of course, it created more tension between her and Rowan, which was great. Once she started getting the hang of it, the book got even better. Celaena isn’t just a mortal badass–she’s also a badass Fae. (Yay!)

I actually love that Rowan and Celaena’s relationship never became romantic. Up until this point, Celaena had basically had a romantic relationship (of some kind) on every male figure presented: Dorian, Chaol, Archer, that thief in book one that I can’t remember the name of. Their relationship was tense, charged and deeply personal–they were undeniably connected. I loved that. And I respected Maas more because she presented a emotional but platonic relationship between a girl and guy (which by the laws of the YA Hot Trainer Meets Rebellious Trainee Plot Line should have ended up being heavily romantic).

I have mixed feelings about this plot line. I got into it, sure…eventually. Basically once we met the wyverns and it turned out that they had personalities. Looking back on the book as a whole, I realize that this plot line was fun to read and will become important in the next book. There was good character development and it added a new aspect to the magic and the world building.

However, I have to admit that these chapters bugged me while I was reading. They felt extraneous. I didn’t want to read them, I wanted to get back to Celaena–the character I actually cared about. The plot line took its sweet time getting to the point (the wyverns and the war games) and it took me even longer to feel emotionally invested in the characters.

Dorian, Chaol, Sorscha, and the Rebels

I liked this plot more than the witches’ but less than Celaena’s.

Dorian and Chaol’s relationship was confusing for me. They were really cold and distant; they didn’t trust each other with their secrets. I know that they ended the previous book on a bad footing, but if they just talked to each other, they had exactly the same motivation. It felt unnecessarily brooding and stubborn. Bleh.

Chaol’s relationship with the rebels was more interesting. His continuing loyalty to the king makes no sense, so it was good to see him start to stray from that. The general/Celaena’s cousin was a smart addition to the book. It made the rebel cause believable (because otherwise it was two guys in dark corners doing…nothing?).

I’m ready for Chaol to get over Celaena. He was turning into a Angel-in-the-first-season-after-he-breaks-up-with-Buffy-esque character. It didn’t fit his personality and stagnated his character development. He maybe finally moved on at the end of the book?!?!

Dorian’s relationship with Sorscha made my heart melt. They were perfect for each other. Their relationship progressed quickly, but I was okay with it because Sorscha’s half of it was a long time in the making, and Dorian is the kind of guy who falls in love hard and fast. I loved that Sorscha helped Dorian with his magic–the bit about the iron helped make the magical elements of the book more complex. I really appreciate that Dorian moved on to a new romantic relationship instead of pining over Celaena (I’m looking at you Chaol); it made the book feel more natural and less in-you-face LOVE TRIANGLE.

I cannot believe the king cut off Sorscha’s head and put one of those devil collars on Dorian!!!!!!! Seriously, that felt unnecessary. I hate it when characters die and I don’t immediately see the importance of their death. Also, the next book, with Dorian under the king’s control, is going to be soooooo sad. *glares at author*

This book was intense. The fantasy side of the book came into full force, and the author continued to world-build by presenting new aspects of magic. Romance moved on or didn’t happen, breaking from the heavily saturated love-triangle-ness of the first two books. New characters and new plot lines pushed the book away from its humble beginnings into a dramatic fantasy series.