Guys! I read a classic! (for English class)

And I liked The Grapes of Wrath. It felt very classic-y. I definitely liked the social commentary dealing with capitalism, the paradox of the American Dream, the meaning of community, et cetera, et cetera–more than the actual story.

Warning: there will be spoilers. I’m assuming many people have read this book, and I’m feeling too lazy to specifically mark each spoiler I mention. If you haven’t read this book yet (and plan to)–don’t read this review! 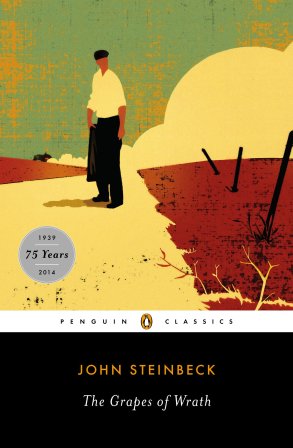 First published in 1939, Steinbeck’s Pulitzer Prize-winning epic of the Great Depression chronicles the Dust Bowl migration of the 1930s and tells the story of one Oklahoma farm family, the Joads—driven from their homestead and forced to travel west to the promised land of California. Out of their trials and their repeated collisions against the hard realities of an America divided into Haves and Have-Nots evolves a drama that is intensely human yet majestic in its scale and moral vision, elemental yet plainspoken, tragic but ultimately stirring in its human dignity. A portrait of the conflict between the powerful and the powerless, of one man’s fierce reaction to injustice, and of one woman’s stoical strength, the novel captures the horrors of the Great Depression and probes into the very nature of equality and justice in America. At once a naturalistic epic, captivity narrative, road novel, and transcendental gospel, Steinbeck’s powerful landmark novel is perhaps the most American of American Classics.

Let me start off by saying this: Steinbeck is an incredible writer. This book really opened my eyes to the greatness and the let’s call it not-so-greatness that is America. The effortless way with which Steinbeck weaves powerful themes throughout both his intercalary chapters and his larger plot is breath-taking. The novel forces you to examine the world that you live in, and to understand that we as Americans today have not moved past the corruption and exploitation showcased in this story, but have changed the clothes it wears. In this regard, I have the utmost respect and awe for the literary work that Steinbeck crafted.

The Grapes of Wrath is a gift to annotating high school students everywhere. There is so much symbolism, juxtaposition, magnificent diction, and social commentary–and for that I desperately thank Steinbeck Homework went by quickly.

The intercalary chapters (AKA the “in between” or “not Joad” chapters) are definitely my favorite part of the book. In my opinion (at least from this book and the other one of his that I’ve read, The Pearl), Steinbeck’s strength lies in crafting beautiful short stories. The intercalary chapters had, for me, the deepest messages about America, capitalism, family, strife, morality, and life itself. Chapter 15 (the one that takes place in the diner) literally ripped out my heart. It was perfect. I think I might have preferred the book if the Joads’ story was removed and only the intercalary chapters remained, but then again, the Joads’ story is undeniably important to the novel.

Unfortunately, I didn’t really like the Joads. Their characters weren’t really relatable (and I’m not just saying that because I’m not a farmer in the Dust Bowl) and I honestly did not like a majority of them. Ruthie and Winfield, though they helped to exemplify the strife the Joads experienced, were annoying. Connie was a slimeball (though that did actually make him one of the more complex characters) and Rose of Sharon was a clueless bitch (until that last scene, which was creepy but helped to round out her character). The rest of the characters felt very flat. They were perfectly drawn in the beginning of the book in true Steinbeck-ian style, but two-hundred pages in, I felt like they hadn’t changed at all. Ma was the powerful, take-no-shit mother figure. Pa was the father figure who believed in hard work but sort of sucked at leading the family. Uncle John was the remorseful alcoholic. Al liked cars and sex. Noah had basically two sentences before he vanished down the stream.

I read books for characters. I want to watch them grow, develop, change to accommodate the strife in their lives. The Joads didn’t do this for me. Through their eternal struggle, they held onto their Okie pride and faith in the world’s rewarding of hard work (no matter how many times they were exploited and screwed over). Sure, their refusal to give up was annotatable as heck, but from the standpoint of a reader for enjoyment, it didn’t work.

I could never decide what Tom’s character was. He was definitely the most complex, and had the most significant character arc over the course of the story. He wasn’t necessarily an impressive character, however.

Casy was inarguably my favorite character. His religious philosophy was brilliant, and perfectly juxtaposed with the religious climate of the day (which is still seen often today). He drove the story forward and had some amazing speeches. I annotated the heck out of his allusion to Jesus, and it was great. His death scene was one of the most moving scenes in the book.

I know this review has a very negative tone, and I’d like to stress that I have an overall positive view of the book. However, I believe the eternal strength of the work is its social commentary, not the Joads’ plot.

5 thoughts on “Book Review: The Grapes of Wrath by John Steinbeck”