I really wanted this book to be good.

Genre: YA contemporary w/ some romance and a main character with mental issues…I don’t know what that is called 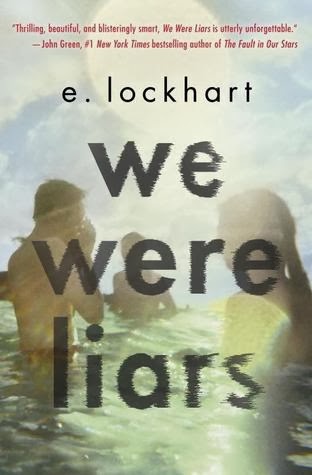 A beautiful and distinguished family.
A private island.
A brilliant, damaged girl; a passionate, political boy.
A group of four friends—the Liars—whose friendship turns destructive.
A revolution. An accident. A secret.
Lies upon lies.
True love.
The truth.

That doesn’t do a good job of describing the book. Here’s my description:

Cady spends every summer on her family’s private island. She has a group of four friends, other family members who are her age, who call themselves the Liars. When she was fifteen, she fell in love, and had an accident. The accident wiped most of her memory of summer fifteen, and leaves her with crippling migraines and a drug addiction for pain killers. After spending a summer away to heal, she decides to come back for summer seventeen to piece together what really happened, and to deal with the failed romance of that year as well.

It’s not much of a description, but it plus the first page was enough to get me to buy the book. I’ve seen a ton of review for this book, ranging from my opinion (it wasn’t that good) to raving reviews that call it a new favorite. I was curious, and my sister really wanted to read it.

Anyway, I read it.

The writing style that drew me in on the first pages soon became annoying. You spend the entire book very much stuck inside the main character’s (screwed up) head. She thinks very melodramatically, with an overdose of nostalgia and metaphors delivered so literally that I couldn’t tell what was real and what was fake for portions of the book. As Cady tries to solve the mystery of her accident two years before, she starts repeating the same things over and over. Sometimes I like this writing style, but for this book it just didn’t work.

When I say the book is stuck inside the main character’s head, I mean that you only ever see things through the lens of her brain. This isn’t unique–we call it first person–but her brain is seriously messed up from the accident, and most of the book is her remembering scenes, not actually doing things. Even the scenes that actually take place in the present are told so much from her point of view that it is hard to tell what is going on and what is just in her imagination. She thinks in metaphors so often that I stopped being able to tell what was real. There is a recurring mention of Gat seeing Cady’s wrists bleed and wrapping her wounds in gauze–I’m still not sure if that literally happened or is a metaphor for other things.

Since the book is told so completely from the main character’s point of view, none of the other characters get any characterization. You get one distinct impression for each of the dozens of characters. These descriptions are vivid and real, but they leave every character with only one facet of their personality. The other members of the family and the dynamic between them is fascinating, but you only get a tiny glimpse of it because she is so caught up in her own issues. (I guess that’s the point of the book, but once I learned about the present issues the family was going through, that was the book I wanted to read.) The main character is so screwed up psychologically after her accident (which wiped away most of her memory of the summer) that I couldn’t get a grip on her character either, beyond her illness. Also, she has a drug addiction, and talks about being high, but her character never reads differently, whether she is high or not. She never really displays addiction-like urges to take her medicine; she only ever takes it after migraines. Maybe she was high the entire time and the migraines were withdrawal symptoms, but if so, that was never said and could have been made clearer to make the book make more sense. I haven’t read many books with a drug addicted main character, and I wish Lockhart had told that part of her story better, so I could experience what should have been a unique and compelling part of the novel.

The message that the book delivered on dealing with tragedy and trauma was good. It just took forever to get to the point.

One thing that really bugs me: you never find out why the group of four friends is called the Liars. She says that they weren’t Liars until Gat shows up, and then details the story of Gat arriving, but never gets back to the reason they nicknamed themselves Liars. They don’t blatantly lie; none of the stories about previous summers are about lies. The name makes no sense. It’s in the title for crying out loud–why did Lockhart not include a reason for it?

*Spoilers ahead* I’m going to rant about the ending. If you want to read this book, because I trust that this book would actually be enjoyed by a large number of people, please stop reading.

I hated the ending. I was good, actually enjoying the reveal, until it got to the fact that the other three Liars had been dead for the entire book. One of my pet peeves is when a book pretends to be contemporary romance and then at the end becomes paranormal. Lockhart could have thrown in other paranormal elements throughout the book–it would have made sense with how messed up her brain was–but he didn’t until his big surprise end. Why do authors do this to me? I don’t like it. Continuity, please.

The ending was already surprising enough. The truth about the fire, the dogs dying, the reason behind the new house–that was all good. It redeemed the book for me, actually, until the last part of the unveil. That secured this book a low ranking.

9 thoughts on “Book Review: We Were Liars by E. Lockhart”